Pray for those Battling Coronovirus!

According to Luke, the very next day as he descended from the mount of transfiguration, a crowd had already gathered to meet Jesus:

“Then on the following day, as they came down the hill-side a great crowd met him. Suddenly a man from the crowd shouted out, “Master, please come and look at my son! He’s my only child, and without any warning some spirit gets hold of him and he calls out suddenly. Then it convulses him until he foams at the mouth, and only after a fearful struggle does it go away and leave him bruised all over. I begged your disciples to get rid of it, but they couldn’t.”

“You really are an unbelieving and difficult people,” replied Jesus, “How long must I be with you, how long must I put up with you? Bring him here to me.”

But even while the boy was on his way, the spirit hurled him to the ground in a dreadful convulsion. Then Jesus reprimanded the evil spirit, healed the lad and handed him back to his father. And everybody present was amazed at this demonstration of the power of God. (Luke 9:37-43, J.B. Phillips The New Testament in Modern English, Geoffrey Bles Ltd., 1960)

A father’s love for his only son drove him to make an urgent appeal to Jesus. We don’t have many details, but Luke reports that an evil spirit would take control of his son, throw him into convulsions, and leave him battered and bruised.

But Jesus overcame the evil spirit, healed the boy, and handed him back to his father.

By looking at one individual’s anguish, seeing the bruised boy, and feeling the pain of a desperate father, we are reminded how such scenes are repeated every day, every night, all around the world. Like the father in Luke’s account we cry out to God to bring healing into our desperate situation.

In the year 2020, a novel coronavirus is sweeping away lives in country after country.

When can it be slowed down? When can a vaccine stop this virus?

Pray for God’s Protection & Power for those Battling Coronavirus!

Let us join in prayer and ask God to demonstrate his power through the heroic doctors, nurses, caregivers, and first responders who are risking their lives to save others.
Posted by Bern Thompson at 3:52 PM No comments:

Email ThisBlogThis!Share to TwitterShare to FacebookShare to Pinterest
Labels: God's Christ, Messiah, Peter's Confession, The Anointed One, Who do you say I am? 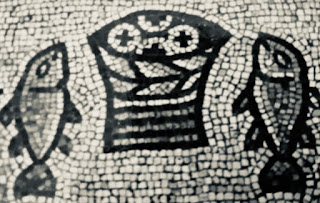 Returning from their journey (Luke 9:3-6) the apostles reported every detail of their experiences to Jesus (Luke 9:10).

Were they surprised again when he “took them with him and they withdrew by themselves to a town called Bethsaida”?

Were the Twelve expecting a quiet time alone with Jesus? If so, they were soon disappointed. Crowds of people were following Jesus wherever he went.

“He welcomed them and spoke to them about the kingdom of God, and healed those who needed healing” (Luke 9:11).

“Late in the afternoon the Twelve came to him and said, ‘Send the crowd away so they can go to the surrounding villages and countryside and find food and lodging, because we are in a remote place here’ ” (Luke 9:12).

Then came another surprise: Jesus replied -- “You give them something to eat.”

“We have only five loaves of bread and two fish”.

Jesus takes the loaves and fishes and gives thanks. Then the astonished apostles take the bread and fish and distribute them among the crowd that numbers well over 5,000 people. Miraculously, surprisingly, Jesus multiplied what seemed like very little given the size of the crowd.

“They all ate and were satisfied, and the disciples picked up twelve basketfuls of broken pieces that were left over” (Luke 9:17).

Their baskets were empty when the disciples left for their retreat with Jesus. After watching him multiply the loaves and fish, their baskets overflowed.

Where would you like to see Jesus multiply resources in the coming year?

Posted by Bern Thompson at 2:04 PM No comments:

Email ThisBlogThis!Share to TwitterShare to FacebookShare to Pinterest
Labels: Feeding five thousand, Five Loaves & Two Fish, Send the crowd away, They withdrew by themselves, Twelve baskets of leftovers, You give them something to eat

Take nothing for your journey

"Take nothing for the road, neither a staff, not a wallet" 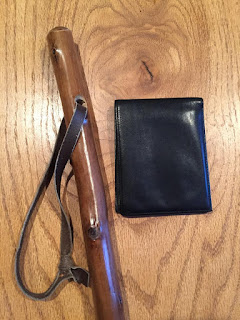 Jesus continually surprised his disciples. He gave them “power and authority to drive out all demons and cure diseases, and he sent them out to preach the kingdom of God and to heal the sick” (Luke 9:1-2).

Imagine how the Twelve responded: were they excited, or a little fearful?

Even more surprising were his next words,  “Take nothing for the road, neither a staff, nor a wallet, nor bread nor money, nor two tunics” (Luke 9:3 Barclay).

Here Jesus invites his first followers to join him on mission.

Just go, don’t wait to pack or make special preparations. Did the disciples hesitate? Did anyone grumble? How would you respond?

Jesus adds still more unusual directions: “Whatever house you enter, stay there until you leave that town” (Luke 9:4).

“If anyone won’t receive you, go out of that town and wipe the dust off your feet as evidence against them” (Luke 9:5 Wright).

Immediately Luke summarizes the results “So they set out and went from village to village, preaching the gospel and healing people everywhere” (Luke 9:6).

As N.T. Wright comments, Jesus “was beginning to share his vocation with them. They needed to learn to do what he was doing, to trust God like he trusted God.”

Jesus still invites his followers to join him on mission today.

Are we ready to build relationships with our neighbors? Are we prepared to share the good news of the gospel where we live and work? Will we pray faithfully for sick family members and friends?

We are commissioned by Jesus just as the Twelve were in Luke 9.


Posted by Bern Thompson at 6:58 PM No comments:

Email ThisBlogThis!Share to TwitterShare to FacebookShare to Pinterest
Labels: "Take nothing for the journey", join Jesus on mission. Luke 9:1-6, neither a staff nor a wallet, nor bread, nor money

Re-starting: Highlights from this Summer’s Readings

I wrote my previous post on May 7th. Today is August 29th. What happened? Summer, of course—some travel, some family times, a beach visit here, a good book there. One constant through the last three plus months—our men’s group continued to meet twice a week so that those who were not traveling could continue our summer program:

Wednesday mornings at 6:00 a.m. we read and discussed my wife Cheryl’s book, Pray Through Your Day Learn to Pray the Benedictine Way, available on Amazon in paperback or Kindle.

Friday mornings at 7:00 a.m. we continued our study and discussion of Luke’s gospel. Alternating between a practical study on praying “the hours” with careful readings in Luke created a balanced weekly rhythm that we will continue to explore as Summer turns to Fall.

Re-starting our journey with Jesus in Luke 8, I realize why I’ve been reluctant to “catch up.” There’s simply so much ground to cover! Luke 8 is as full of important lessons as my Summer was full of all kinds of diversions and distractions!


Luke 8 begins with Jesus traveling from one town and village to another “proclaiming the good news of the kingdom of God.” With him are the twelve and a remarkable group of women. Jesus had cured these women of evil spirits and diseases. Luke, who often draws attention to the role of women in his gospel, explains they are financially independent women who are supporting Jesus’ ministry using their own resources (Luke 8:1-3).

Read the Parable of the Sower Luke 8:4-8, and Jesus’ explanation of the story when the disciples ask him to interpret it for them in Luke 8:9-15.
As N.T. Wright comments “If Jesus was telling this story today, he might well include other categories as well. What about the seeds that were planted in good soil but were ruined by acid rain? What about the plants that were coming up nicely but were bulldozed by occupying forces to make room for a new road?” (Luke for Everyone, Westminster, John Knox Press, 2001, 2004, page 93).

The thought-provoking teaching continues, with Jesus reminding everyone that his “mother and brothers are those who hear God’s word and put it into practice” (Luke 8-16-21).

Anyone exploring the question “who is Jesus?” will want to look closely at the second half of Luke 8.  First, Jesus calms a storm on the lake when his disciples thought they were going to drown (Luke 8:22-25).

Next, Jesus commands an impure spirit to come out of a demon-possessed man who had been kept under guard and chained. He was named “Legion” because so many demons had entered him and taken over his life. This distraught man becomes completely sane and calm after Jesus commands the evil spirits to leave him (Luke 8:26-37). Although he then begs Jesus to take him with him, Jesus sends him away saying “Return home and tell how much God has done for you.” Luke adds “So the man went away and told all over town how much Jesus had done for him (Luke 8:38-39).

Jairus, a synagogue leader, throws himself at Jesus’ feet because his 12-year-old daughter is dying.

On the way to Jairus’ house, the crowds following Jesus nearly crush him. In the midst of the swirling throng Jesus feels power leaving him, sensing a desperate touch by a suffering woman longing for healing. She had experienced twelve years of bleeding that no doctor had been able to heal. But when she managed to touch the edge of Jesus’ cloak, her bleeding stopped immediately. “Who touched me?” asks Jesus.
In the presence of all the people, she explains herself, and how she was instantly healed. “Then he said to her, ‘Daughter, your faith has healed you. Go in peace’” (Luke 8:47-48).

While Jesus is still speaking, messengers arrive from Jairus’ home to report that his daughter has died. Jesus startles everyone when he tells Jairus “Don’t be afraid; just believe, and she will be healed” (Luke 8:50). When Jesus takes her by the hand, he says “My child, get up!” Luke reports that her spirit returned, and at once she stood up. “Then Jesus told them to give her something to eat. Her parents were astonished, but he ordered them not to tell anyone what had happened” (Luke 8:55-56).

To summarize, in one fast-moving chapter, Jesus demonstrates his unique power and authority over—
N.T. Wright's commentary helps summarize what we've seen and heard in Luke 8: "Luke has been patiently pointing out, through one story after another, who Jesus really is . . . in whatever problem or suffering we face . . . the presence of Jesus, getting his hands dirty with the problems of the world, is what we need and what in the gospel we are promised" (Luke for Everyone, Westminster, John Knox Press, 2001, 2004, page 105).